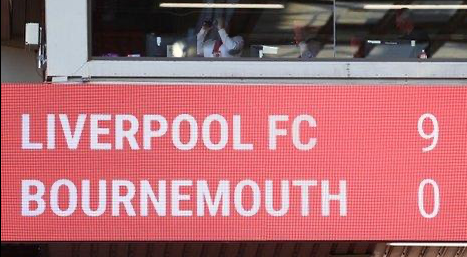 Good morning on this lovely Monday. Four games have already been played and it’s about time we talked about it! We have been really busy with various things going on but now it’s time to get stuck in. Let’s have a look at this weekends games and talk about a strange start to the season!

Let us start with the first game to be played and that was Southampton at home to Man Utd. There was very little to separate these teams with Utd just edging it on possession but the Saints had 17 shots compared to Utd’s 11. Still, it’s what hits the back of the net and that is what Fernandes did in the 55th minute. Nothing spectacular from either side here but that is Man Utd’s 2nd win on the bounce. Will they be able to get into the top 6?

Brentford dominated Everton with 58% possession, 20 shots with 5 on target and superior in all areas of the pitch. After hammering Man Utd 4-0, Brentford then lost to Fulham away before facing the Toffees at home. Everton are yet to win a game and had only scored 2 goals prior to this match. It was Anthony Gordon who gave the visitors the lead but Janelt equalised late in the 2nd half to share the points.

In a pretty drab game at the Amex Stadium, it was Brighton who got the 3 points and continue their fine start to the season. Pascal Gross got the only goal of the game half way through the 2nd half and Brighton sit 4th in the league. Leeds will feel a bit hard done by as they suffer their first loss of the campaign but are in 5th place at the moment.

Chelsea were 2nd best throughout this encounter after Conor Gallagher got sent off but still managed to pull a win out of the bag. Sterling got off the mark with a goal not long after the restart and followed it up with a 2nd in the 63rd minute. Harvey Barnes got a consolation 3 minutes later but Chelsea managed to hold on and take all of the points.

After losing to Man Utd with a toothless display, Liverpool took their frustrations out on sorry Bournemouth. The stats are typical Liverpool with 70% possession and 19 shots and 12 on target. Luis Diaz opened the scoring on 3 minutes and you just felt it was going to be a long day for the Cherries. Harvey Elliot got one 3 minutes later, Trent AA scored a banger in the 28th, Firmino grabbed his first goal 3 minutes on and Van Dijk headed home in the 45th minute.

The Cherries had no reply as Mepham put into his own net from the restart, then Firmino added his second in his best performance in some time. It took 18 whole minutes before Liverpool got their 8th goal courtesy of Fabio Carvalho. Diaz wrapped it up in the 85th minute and the Reds equal the highest score in a Premier League game. Surprisingly it is their 1st win of the season but on that showing I’m sure there’s more to come.

Crystal Palace shook the Etihad by smashing in 2 goals, one an own goal from John Stones, in 21 minutes. City absolutely dominated their opponents but couldn’t find a way through in the first Half. Pep said some words which I’m sure were very colourful at half time and City came out with intent. Bernardo Silva put City on the comeback trail with a fine effort before Haaland took over. Goals in the 62nd, 70th and 81st minute secured his first hat-trick in the Premier League and put the other 19 teams on high alert! Top scorer this season?

Another dominant performance from Arsenal as they looked to maintain their 100% record but they struggled to break down a well organised Fulham side. In fact it was Fulham and their danger-man Aleksander Mitrovic who hit first. Gabriel, not that one, or that one, Magalhaes dallied on the ball and was made to pay by quick thinking Mitrovic. New Gunners Captain, Martin Odegaard took the game by the scruff of the neck and equalised with a deflected shot in the 64th minute. It was that man Gabriel, not that one, or that one, but the man who cost Arsenal a goal who got the winner. Fighting spirit? I think so.

West Ham finally got their season underway with a hard fought win at Villa Park. Pablo Fornals was the man to get the winning goal but it could have gone either way. The Hammers will be buoyed by this result and maybe it could be the kickstart they need. Can Villa and West Ham improve and climb the table? It’s going to be tough for both of them.

Newcastle had most of the ball at Molineux but could only grab a last minute equaliser to save a point. Wolves took the lead with a superb goal by Neves in the first half. It was pretty end to end stuff in the second but Saint-Maximin scored a stunning goal to equalise and maintain the Magpies unbeaten start.

Tottenham took all the spoils but looked underwhelming in doing so. Newly promoted Forest made them look pretty average but that man Kane won it for the Spurs. Talking of Kane, how has he never been sent off in the Premier League? Tottenham committed 13 fouls and the only yellow card was shown to Kane when he jumped in to the away end. He committed 5 fouls himself but because he is England captain he is excused for nearly every single one!! Still, his first goal was good and his second was an easy header as the Forest defence switched off.

Man City might just have found their replacement for Sergio Aguero as Haaland scored his first hat-trick. He looks quality and is hitting the ground running which is great for City, not for the rest of the teams though!

Another striker who has settled well at his new club is Jesus. The Arsenal striker has started well but was marked closely by Fulham. He still showed some superb touches and will be one to watch this season.

Tottenham look very average so far and have been fortunate in their 3 games since hammering Southampton. The fact they are still unbeaten shows there is something there. If they start clicking they could be very hard to beat. Refs do need to pay attention to the amount of fouls they commit and not be afraid to brandish a card now and then!

A strange start to the season!

It has been a strange start to the season with some odd results. Arsenal winning 4 on the bounce and sitting top of the table being one of the strange things happening!! Chelsea, Liverpool and Man Utd have had slow starts but could be finding their feet now. Two losses followed by a win against Liverpool, then Southampton shows that Utd can pull together.

Leicester sit at the bottom of the table with just the 1 point with Wolves and Everton on just 2. I thought Everton might do quite well but there is something wrong at Leicester. Brighton, however, are the surprise package so far. Best defence and unbeaten, can they maintain this level of football? Only time will tell.

It has been a strange start to the season and there will be plenty more strange going on as the season progresses.

It’s time to make a prediction and this is how I see the season going. My end of the season table is below and at this stage it’s anyones guess as to what the actual final positions will be. Feel free to comment and let me know what your predictions are for the season ahead or just laugh at mine!!

That’s your lot for today, we will be back on a more regular basis from now on with the next round up on Thursday after the midweek games. Thanks for reading A strange start to the season! Feel free to read our last blog We are back!

This website uses cookies to improve your experience while you navigate through the website. Out of these cookies, the cookies that are categorized as necessary are stored on your browser as they are essential for the working of basic functionalities of the website. We also use third-party cookies that help us analyze and understand how you use this website. These cookies will be stored in your browser only with your consent. You also have the option to opt-out of these cookies. But opting out of some of these cookies may have an effect on your browsing experience.
Necessary Always Enabled
Necessary cookies are absolutely essential for the website to function properly. This category only includes cookies that ensures basic functionalities and security features of the website. These cookies do not store any personal information.
Non-necessary
Any cookies that may not be particularly necessary for the website to function and is used specifically to collect user personal data via analytics, ads, other embedded contents are termed as non-necessary cookies. It is mandatory to procure user consent prior to running these cookies on your website.
SAVE & ACCEPT